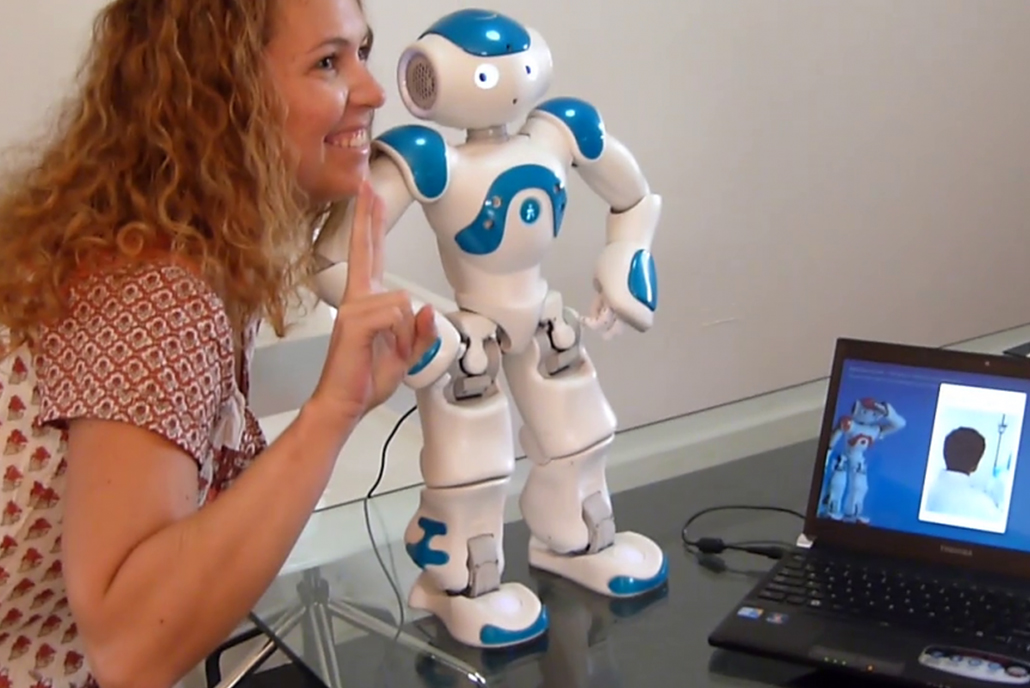 SavvyBot was a project designated for an academic Human-Machine-Interaction event and later a tech conference. The Social Interactive Robotics platform was designed to work on any humanoid robot and was initially implemented on the Aldebaran NAO. It is a software framework tht facilitates interaction with passing humans by utilizing the web and social networks in clever ways.

SavvyBot is a software platform for Humanoid Robots. It lets the robot interact with humans by utilizing the web and social networks in clever ways. In its centre is a humanoid robot that interacts with people as they pass by. Designed for continuous operation, SavvyBot enables a robot at a reception desk of a corporate head office or at a permanent exhibition to provide a few minutes of entertainment and useful information. The robot’s apparently intelliget behaviour is induced by the SavvyBot application using a combination of online services such as chatterbot, face recognition, business card OCR, social networks, news, business intelligence, text mining, text/video/music search etc. SavvyBot acts as a personification of a receptionist. The robot gains “personality” through SavvyBot, the costumized application.

The Savvybot application is continuously scanning the robot’s environment trying to recognize known and new faces that pass by. It can make the robot seemingly capable of acting on past interactions (such as resuming interaction with known visitors), engaging with new faces and quickly learn about a person’s likes and any other information his clever algorithms can find. The type of interaction can be tailored to each location and user’s needs and requirements. SavvyBot runs on the NAO® humanoid robot, manufactured by Aldebaran Robotics.

A keyboard can be used to enter responses to questionsas well as voice. A companion computer can also be used to convey additional media such as textual hints and video clips. In this demo, the SavvyBot application tries to recognize people that pass by and offers to become their friend on Facebook. Savvybot has a Facebook ID (“SavvyBot”) and likes to take a picture together with new friends to post them on Facebook’s timeline. Once SavvyBot is your friend on Facebook, Savvybot’s algorithms analyse your Likes and will make the robot dance to your favourite tune. The robot, controlled by SavvyBot may also comment about where you live and say quirky things about your status and twitter feeds. 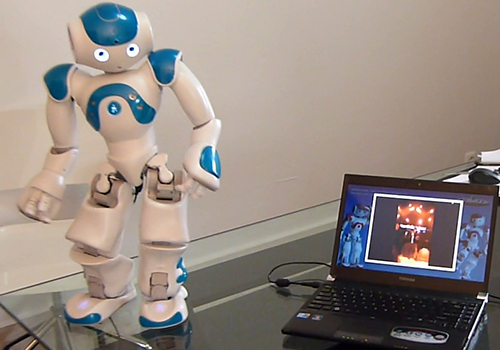 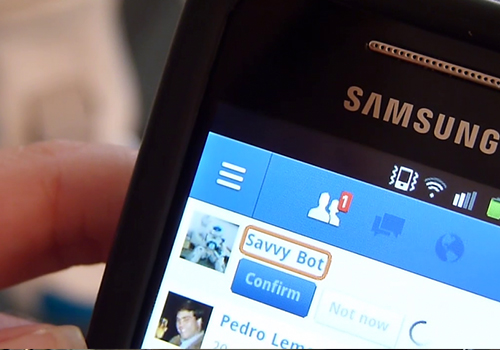 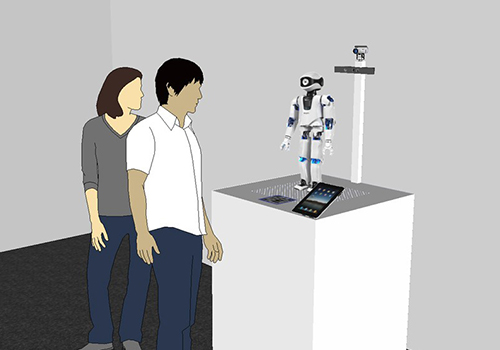 Rich H.R.I. and State of the Art Architecture. SavvyBot leverages state of the Art Advances in the area of H.R.I – Human Robot Interaction. Combining areas of psychology, computer science and robotics, H.R.I is a growing area of interest bringing us the robots that Science Fiction has taught us to expect. SavvyBot’s advanced architecture is designed to autonomously find and present interesting information for the person it’s interacting with using multiple resources including Social networks, Business Card OCR, Text mining and others.

Engaging New Visitors
SavvyBot is continuously operating and scanning his environment for new or known faces. When a new visitor is found, SavvyBot is programmed to grab the person’s attention and to interact and find out more about one’s interests. One of these activities is becoming friends on Social Networks where his algorithms will quickly determine the person’s Likes based on online Profile and Activities, creating a unique and personalized experience for each and every visitor.

Identifying Returning Visitors/Faces
SavvyBot keeps track of everyone it meets and of the conversations, and is capable of identifying a person and resuming interactions providing relevant news, updates and clever comments.

Clever and Expressive Interactions
SavvyBot is a rich H.R.I. platform capable of being very expressive.
Based on the Person’s profile and Customer requirements, SavvyBot can make the robot dance to a person’s favourite tune, present relevant news to the person interacting with him, offer entertaining Activities (such as Sharing a Picture together on his Facebook wall), welcome Visitors (for example at a Reception Desk providing information about the Company or Event) and much more.

< Back to Robosavvy Labs