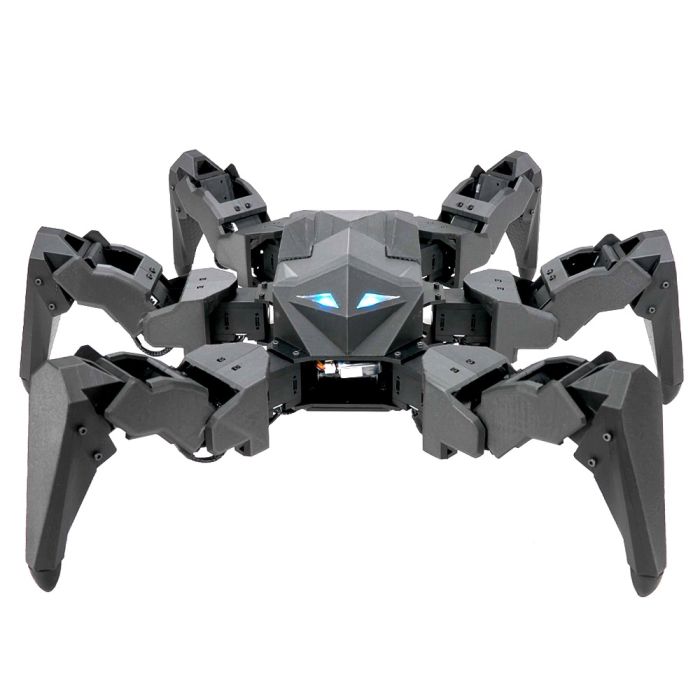 Skip to the beginning of the images gallery

Be the first to review this product
UK WAREHOUSE 0 in stock, available to order.
SKU
TR-KITMKIVXC
Brand
Trossen Robotics

Quick Overview
The PhantomX MK-IVS Hexapod is a six legged, ROS research platform featuring the Rasberry PI 4b and the DYNAMIXEL XL Series Smart Servos from Robotis. The MK-IV comes pre-assembled and tested and is fully supported in Ubuntu 20.04c / ROS Noetic (Ubuntu 18.04c and Melodic are also supported).

Secured and trusted checkout with

Some of the specifications for the MK-IVS will be released in the coming days / weeks.

The PhantomX MK-IVS Hexapod is a six legged, ROS research platform featuring the Raspberry PI 4b and the DYNAMIXEL XL Series Smart Servos from Robotis. The MK-IV comes pre-assembled and tested and is fully supported in Ubuntu 20.04c / ROS Noetic (Ubuntu 18.04c and Melodic are also supported). The platform offers wifi, tethered connection and wireless via Bluetooth / Playstation 4 Control options. The MK-IV Hexapod has a payload capacity of roughly 1lb, walking speed of roughly 190mm/s (default gait) and an estimated run time on battery of 45 minutes.

The Hexapod comes in both shelled and unshelled variations (the unshelled version does not contain the neopixel eyes feature to inform users of current state of the hexapod).

Supported on Ubuntu 20.04 with ROS Noetic and Ubuntu 18.04C with ROS Melodic. Packages include full meshes and URDFs (including accurate inertial models), driver node that controls the physical robot and publishes joint states as well as gazebo and moveit support. Examples are also included to show users how the core packages work.

The Raspberry PI 4 Model B features a high-performance 64-bit quad-core processor, dual-display support at resolutions up to 4k via a pair of micro-HDMI ports, hardware video decode at up to 4kp60, dual-band 2.4/5.0 GHz wireless LAN, Bluetooth 5.0, Gigabit Ethernet, USB 3.0 and PoE capability (via a separate PoE HAT add-on). The RPI4 comes with 4 GB of Ram and 32 GB Micro SD. The DYNAMIXEL X-Series smart servos offer features that would normally only be found on industrial level motors for a fraction of the price.

Addressable - All servos have unique IDs allowing users to easily communicate with individual servos or groups of servos. The Shadow ID feature also allows for easy control of a second servo in dual servo joints.

Daisy Chain - DYNAMIXEL servos are connected in a daisy chain (each servo plugged into the next in series) making them extremely scalable and easy to maintain. To make the lower-level actuator ROS wrappers able to be easily integrated into our higher-level code, we have developed an intuitive approach called the Interbotix Research Robotics Open Standard (IRROS). Every repository that builds on top of this contains a chart similar to the above generic one - but filled in with the specifics for each robot. There are five main layers: Hardware Layer - Describes the Physical Setup of the Robot, Driver Layer - The first software layer containing ROS wrappers for actuators & sensors, Control Layer - Software layer containing ROS packages per robot type, Application Support Layer - Provides Python modules or 'support-level' ROS packages and the Reseach Layer - The final software layer at which an end user programs their own code. For more information on IRROS click here.

Reviews
0
Rating:
0% of 100
Reviews
Write Your Own Review